The History of the Big Sky Skating and Hockey Association (BSSHA)

In a sense, the BSSHA is a continuation of a tradition started in the early 1980’s, not long after the creation of the Big Sky Resort. A seasonal ice rink large enough for ice hockey was created at Big Sky’s historic Buck’s T-4 Lodge by a group calling themselves the Gallatin Canyon Hockey Association. By 1987, however, interest had dissipated and the rink no longer existed. 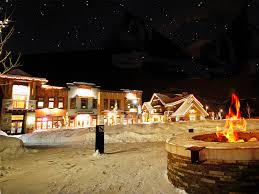 More than 20 years later, the idea of a skating rink suitable for hockey was reborn. There had been a small rink up the Mountain at the Big Sky Resort, and Bill Simkins and his right hand man, Ryan Hamilton, decided to create a rink of their own in their development, the Town Center. At the time, however, Hamilton was working with the Arts Council to create a blueprint for a Town Center Park where Summer concerts could be held. He realized from his experience with the small rink in the Town Center that there seemed to be an interest in skating and hockey, and decided to modify the design of the new Town Center Park so that it could be used in the Winter as a site for a much larger ice rink. He and Bill Simkins then obtained zoning approval for that purpose.

In March of 2009, Hamilton organized a public meeting to gauge whether there were enough people in the Big Sky Community interested in a hockey-sized rink and to identify those who might do the work necessary to make that a reality. To his surprise, a large number of people turned out. Hamilton then persuaded some of those who had attended the public meeting to become an organizing group and the Big Sky Skating and Hockey Association was born. In addition to Ryan Hamilton, that original group included current officers and board members, Ryan Blechta and Gary Hermann, as well as Griffin Kilby, Brian Dolan, and Marty Pavelich, a former NHL star who played on four Stanley Cup teams. The BSSHA was incorporated in 2010 and later an application was filed with IRS which eventually resulted in the new corporation qualifying as a 501(c)(3) non-profit organization. Ryan Hamilton became the organization’s first President.
The BSSHA has operated largely as a grass roots organization, depending greatly upon volunteers to create and maintain the ice and run their programs, and a lot of creativity. With limited financial resources, the BSSHA founders had to work hard to find an inexpensive set of dasher boards, but eventually located a dilapidated wooden set in North Dakota which they obtained for a mere $500 and the cost of transportation to Big Sky. Initially, they did not have a device to properly resurface the ice, like a Zamboni, but Ryan Blechta used the skills and knowledge he had developed as assistant golf course superintendent at the Yellowstone Club to construct a crude ice resurfacing device for the new rink. Though the BSSHA did not have the money to buy even a used Zamboni, a chance meeting gave them an opportunity to obtain one. 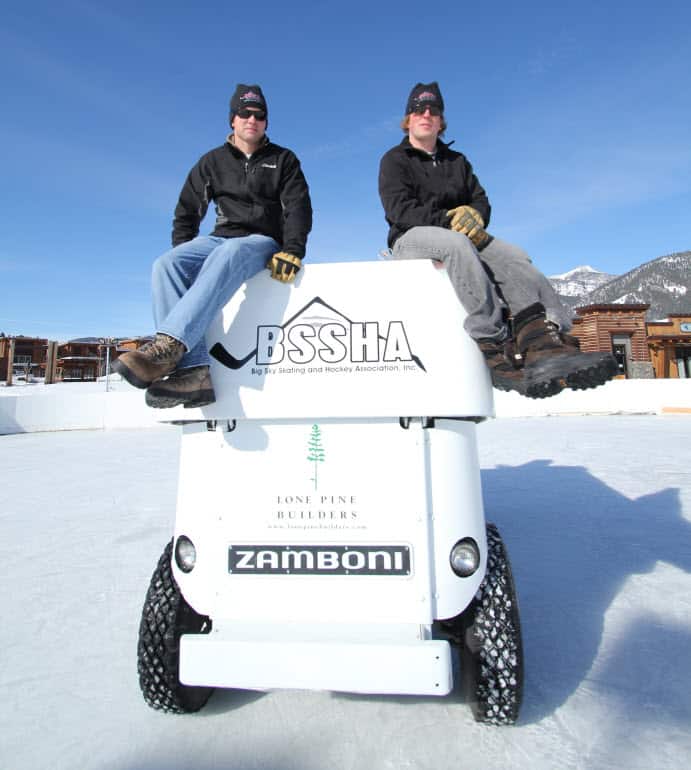 The meeting came because the BSSHA decided to host their first hockey tournament, the Pavelich Invitational, which has become an annual event. One of the players in that game, Jason Martel, was the owner of the Bozeman Ice Dogs Junior Hockey Team. Martel mentioned to Ryan Blechta and Griffin Kilby that an old Zamboni kept as a backup for the defunct Gallatin Valley Ice Garden ice rink in Four Corners, sat rusting in a field and that he would be willing to donate it to the BSSHA if they could get it to work. Blechta and Kilby then drove to Bozeman for a look and discovered that the machine was not operational and might not be repairable. It was so old that new parts were not available. Nonetheless, they thought that they might be able to fabricate the needed parts and then located people who could do that and others who were willing to donate their time to repair and refurbish the Zamboni.
The improved refurbished Zamboni greatly enhanced the quality of the ice surface and interest in the rink grew. Hockey and skating programs were created. With the help of the Resort Tax Board and the Yellowstone Club Community Foundation, the BSSHA obtained overhead lights needed for night skating and hockey. Ryan Blechta, who is now President of the BSSHA, recalls how much he enjoyed watching people enjoy the rink, but he also saw potential for the future. As he said at the time, “Maybe 10 years from now there’s an indoor rink. Maybe I’m not even here anymore. To be able to start something fresh and to have people to work with, it’s been great. We’re still getting there, baby steps.” 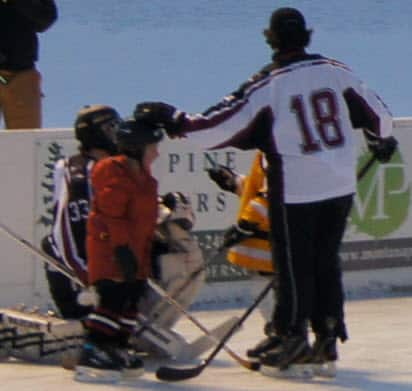 Those “baby steps” eventually became much larger. The BSSHA reorganized their fundraising efforts and brought in significant funds from businesses in the area willing to become “board sponsors”, with their support recognized by logos on banners being displayed in the inside of the dasher boards. Successful applications were made to local foundations for the funding of a new building to house the Zamboni and to purchase skates and equipment to be made available to local children. In August of 2014, the BSSHA pulled off its first golf tournament, the Icehouse Open, raising even more money for the organization. 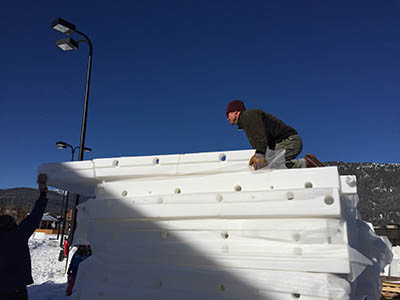 Eventually, the BSSHA Board concluded that, with additional fundraising, they had a chance of moving even closer to their ultimate goal of a permanent, refrigerated ice facility. In 2015, they applied to the Resort Tax Board for funds that would allow them to replace their aging wood dasher boards with a new set suitable for a permanent rink. The Resort Tax Board agreed to match, dollar-for-dollar, all funds raised by the BSSHA up to $25,000. With a large donation by the Yellowstone Club Community Foundation and a successful golf tournament, the BSSHA was quickly within range of achieving its fundraising goal. With a successful “Board Sponsorship” campaign and the support of several foundations, including the Spanish Peaks Community Foundation, the BSSHA, by October 2015, had raised the additional amounts needed to obtain the full Resort Tax Board match. The BSHHA then purchased the new boards, and player boxes, and these are now being used in our rink. This enabled the BSSHA, for the first time, to have a regulation sized hockey arena!

In 2020, our permanent ice rink was completed in Town Center along with new boards, and permanent housing for our Zamboni! We are excited to be able to offer a longer ice season to the community and visitors with our refrigerated rink!